Director of the theater 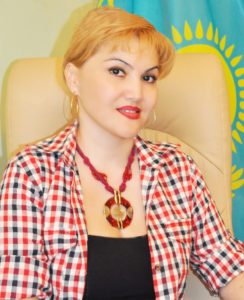 Togzhan Skendirovna Khasangalieva was born in 1967 in Almaty. In 1990 she graduated from the Almaty Theater and Art Institute named after T.Zhurgenov, on the specialty “Drama directing”.

She began her career in 1987-1992 working in the children’s Fund, as the head of the department of work with children.

From 1992 till 1994 she worked as an actress at the Republic Puppet Theater in Almaty.

In April 2007 she was appointed as the head of the puppet department of the State Municipal Management Organization “Theater for Young Audiences” of Astana city.

In September 2008, by order of the Astana City Department of Culture, she was appointed Deputy Director of the State Municipal Management Organization “Animatronics Jungle Theater”.

Togzhan Skendirovna performs a large amount of work, always meets deadlines, the performed work proves her high professionalism and dedication to the theater. Together with administrative work, she is also engaged in creative work. The author of the performances “The Lost City”, “The New Year in the Jungle”, “The Myth of the Ancient World”, “Mowgli”, “Nuryz-Duman”, “Ratha-the Princess of the Jungle”, “Hello, Astana” and “Koktem Aueny”.

She is distinguished with the ability to analyze facts, collect the necessary information, demonstrates the ability to consider different options and make the right decisions based on this. Her maturity and ability to control emotions is one of the reasons that colleagues strive to work with her and under her guidance.

In April 2010, by order of the Department of Culture and Sport of Astana city she was appointed director of the State Municipal Management Organization “Puppet Theater”.